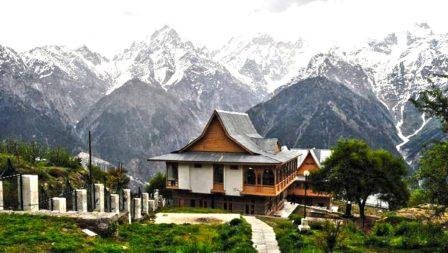 Day1:-Pick up from Delhi airport and arrive at Dharamshala

Morning drive from Delhi to Dharamshala covering some of the most beautiful and breathtaking views of the Dhauladhar range portion is a mustering into Dharamshala. Evening free to relax and rest after the long day drive enjoying the overlooking high mountains covered with silent snows and deep boulder-strewn gorges. overnight stay at the hotel.

This morning, wake up to the call of the Dhauladhar range of mountains! you will be taken for a full-day tour of Dharamshala covering Dalai Lama's village - popularly known as the Tibetan children's village, Mcleodganj area, Bhagsunath Temple, St. John's Church, Dal lake and Talnoo - which is the highest point in Dharamshala from where the best view of the Dhauladhar range is possible. overnight stay at the hotel.

After check out from the hotel and going to Dalhousie. Doing local sightseeing of Dalhousie, Jandhrighat Palace, Subhash Bowli, Bara Pathar, Panjphulla, Subhash Chownk, Satdhara and Old Churches of Dalhousie. & Overnight at hotel.

Today after Breakfast proceed to Khajjiar known as Mini Switzerland of India, on the way to Khajjiar enjoy a Nature walk suggestive here from Kalatop toll Bridge to Kalatop Rest House. after full day excursion back to Dalhousie. Overnight at the hotel.

Departure from Dalhousie and drop to Delhi airport.

Home to the holy abode of the Dalai Lama at McLeod Ganj, this town located in Kangra Valley has numerous Buddhist monasteries, scattered amidst the hills surrounding this region. With the establishment of the Tibetan government-in-exile, the traditions and flavors of Tibet have found its way into the culture and cuisine of Dharamshala.

The region also has many ancient temples and beautiful churches built during the reign of the British, tucked away in the lush green forests. Dharamshala boasts of an International Cricket Stadium, which has hosted many international and IPL cricket matches. The Dharamshala International Film Festival (DIFF) is held every year, in the month of November. Surrounded by pine-clad mountains and spectacular views, Dalhousie is a gem of a hill station in India. Located in western Himachal Pradesh it has a quaint and laid-back atmosphere.

The scenery is very vivid with flowering rhododendrons and dense forests filled with pines, oaks, and deodars. The town was established by the British as a summer retreat for their officials. Dalhousie is dotted with beautiful buildings sporting colonial architecture, reminiscent of the British era, such as St. Francis’s Church, St. Patrick’s Church and St. Andrew’s Church.

With serene environs and majestic snow-capped mountains, Dalhousie refreshes your senses. Subhash Baoli is a quiet sanctuary surrounded by towering trees, named after ‘Netaji’ Subhash Chandra Bose, who spent a lot of time here in meditation.Take an adventurous trek to the top of the picturesque Dainkund Peak. Get a few souvenirs from the Tibetan Market to commemorate the trip to Dalhousie.